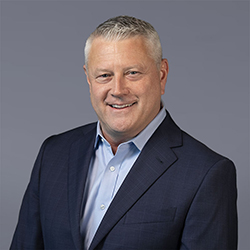 Dave Robertson is senior vice president, chief HR officer for Guild Mortgage. He oversees the company’s human resources and management training programs, which are focused on building capabilities and leadership best practices within Guild’s growing workforce throughout the U.S. He is a founding member and vice president of the Guild Giving Foundation, a nonprofit organization that encourages volunteerism among the company’s nearly 4,000 employees and supports local causes.

Under Dave’s direction, Guild has implemented new training and development programs across the company. He has helped centralize corporate recruiting efforts and expanded its national reach to attract a broader array of talent in support of Guild’s growth.

He leads Guild University, the company’s core learning and development center, which features coaching, mentoring and ongoing professional development for employees at all levels of the company. Guild has been recognized nationally for its corporate culture and named a Top Workplace by The San Diego Union-Tribune every year since 2013.

Dave has more than 25 years of training and human resources experience in diverse industries including telecommunications, information technology and healthcare. Prior to joining Guild as director of organizational development in 2015, he held learning and development roles with Millennium Health, Amylin Pharmaceuticals and HP Enterprise Services (formerly Electronic Data Systems) and was a senior trainer and systems analyst for AT&T (formerly BellSouth Telecommunications). He graduated from Mississippi State University with a bachelor’s degree in computer science in 1990.